N O C T U R A M A  recalls the eponymous album by Nick Cave & The Bad Seeds, released in 2003, whose hypnotic and melancholic power as well as its well balanced intonation of loud and soft sounds – or dark and bright colors – create a link to Heichel’s pictorial world. The song “There is a town” evokes the association to the “dark sky” of the so-called “Kerzer Nocturama”, an innovative zoo project in Switzerland: By filtering the sunlight, the visitor is enabled to explore a night world with its special flora and fauna. The fascination for the visitor consists in making surprising discoveries by walking through an artificial moonlight scene in a protected night setting during the day. Night and day are interchanged and Katrin Heichel’s works may have a similar impact on the viewer – the darkness bears secrets and increases our imagery phantasy. 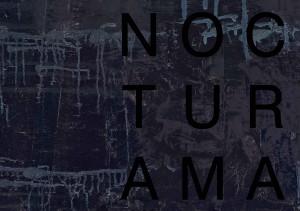 ARTIST TALK & BOOK LAUNCH
The exhibition catalog will be presented on occasion of the artist talk with Katrin Heichel and Clemens Meyer on 13 July 2016, 7pm. The artist talk will be in German language moderated by Anka Ziefer, Director of the G2 Kunsthalle. Free admission! Download press release (German).

OPENING HOURS
The G2 Kunsthalle is open every Wednesday from 3 to 8 pm. To visit our special exhibition and the permanent collection from Thursday to Monday please book a guided tour (German/English) online in advance. In 2016 the G2 Kunsthalle participates, for the first time after its foundation in 2015, in the Leipzig Museum Night on 23 April 2016. Special opening hours on Saturday April 30, 2016 from 12am to 6pm and on Sunday, 1 May 2016 from 12am to 3pm.